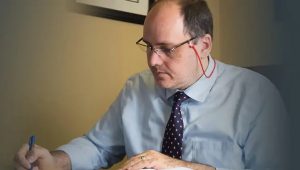 What Makes Attorney David Hilbern Uniquely Qualified To Represent You?

About-David Hilbern has had a diverse legal career since beginning to practice law in 2001. Now, at the Cain Law Office, he concentrates much of his practice on Chapter 7 and Chapter 13 consumer bankruptcy cases.

Initially interested in a career in medicine, David received an undergraduate degree in biochemistry from the University of Oklahoma in 1997.

By the time he graduated, however, his career interest had shifted to law, and he enrolled at the University of Oklahoma College of Law, where he focused on business law and bankruptcy law.

Upon receiving his J.D. in 2000, David worked for a small firm in Tulsa for a time, doing family law, before taking a job in the legal department of the State of Oklahoma’s Department of Tourism.

However, then he went back into private practice with an Oklahoma City firm, where he handled bankruptcy and personal injury plaintiff cases as well as Social Security matters.

In 2014, David joined the Cain Law Office, where his practice has grown steadily. He still handles personal injury and Social Security cases, but he gets the most satisfaction out of helping people with bankruptcy cases.

“When people come to see me, they’re in dire financial straits. They don’t know what to do,” he says. “And after they talk to me, they say, ‘I feel so much better.’ You get a good feeling like you’re helping people and they’re happy.”

David is a member of the National Association of Consumer Bankruptcy Attorneys and the Bankruptcy Section of the Oklahoma Bar Association.

A lifelong Oklahoman and Oklahoma City native, Hilbern enjoys fishing, working on cars, and spending time with his family.

This is a notification that can be used for cookie consent or other important news. It also got a modal window now! Click "learn more" to see it!

We may request cookies to be set on your device. We use cookies to let us know when you visit our websites, how you interact with us, to enrich your user experience, and to customize your relationship with our website.

Click on the different category headings to find out more. You can also change some of your preferences. Note that blocking some types of cookies may impact your experience on our websites and the services we are able to offer.

These cookies are strictly necessary to provide you with services available through our website and to use some of its features.

Because these cookies are strictly necessary to deliver the website, refuseing them will have impact how our site functions. You always can block or delete cookies by changing your browser settings and force blocking all cookies on this website. But this will always prompt you to accept/refuse cookies when revisiting our site.

We fully respect if you want to refuse cookies but to avoid asking you again and again kindly allow us to store a cookie for that. You are free to opt out any time or opt in for other cookies to get a better experience. If you refuse cookies we will remove all set cookies in our domain.

We provide you with a list of stored cookies on your computer in our domain so you can check what we stored. Due to security reasons we are not able to show or modify cookies from other domains. You can check these in your browser security settings.

These cookies collect information that is used either in aggregate form to help us understand how our website is being used or how effective our marketing campaigns are, or to help us customize our website and application for you in order to enhance your experience.

If you do not want that we track your visit to our site you can disable tracking in your browser here:

We also use different external services like Google Webfonts, Google Maps, and external Video providers. Since these providers may collect personal data like your IP address we allow you to block them here. Please be aware that this might heavily reduce the functionality and appearance of our site. Changes will take effect once you reload the page.

The following cookies are also needed - You can choose if you want to allow them: